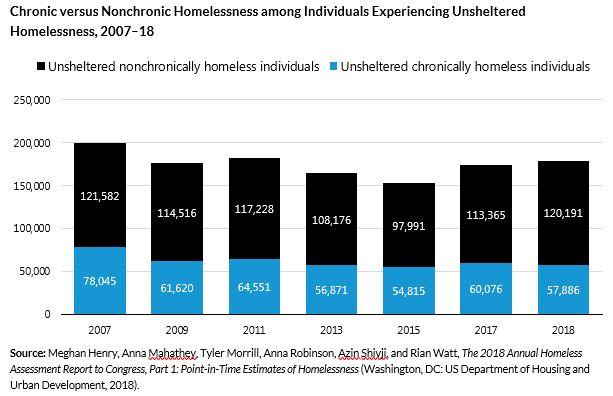 Over 90 percent of people experience unsheltered homelessness as individuals, meaning they do not have a child with them. Many of these individuals are also considered chronically homeless, which the US Department of Housing and Urban Development (HUD) defines as an unaccompanied homeless person with a disabling condition who has either been continuously homeless for a year or more or has had at least four episodes of homelessness in the past three years.

This spike in the number of unsheltered nonchronically homeless individuals may indicate that many were experiencing homelessness for the first time. Not coincidentally, these jurisdictions also have low vacancy rates and few available units for those at or below the extremely low–income threshold.

Nonchronically and chronically homeless individuals may require different interventions and service levels to get them into stable housing. Nonchronically homeless individuals experiencing homelessness for primarily financial reasons may need a housing voucher or other guaranteed rent subsidy. In addition to a permanent housing subsidy, chronically homeless individuals might also need support services, such as mental health or substance abuse counseling. Permanent supportive housing combines affordable housing with wraparound support services and is cost-effective when compared with the cost of staying in a shelter. However, many jurisdictions lack adequate permanent supportive housing units, creating a backlog in shelters. Jurisdictions must invest in permanent housing solutions to ensure that there is a flow-through between people entering shelters and people exiting to permanent supportive housing. Or better yet, permanent housing programs could allow entry directly from the streets through Housing First models.

To encourage people experiencing homelessness to go to shelters, shelters should have flexible operating accommodate the needs and concerns of would-be residents. When shelters have strict entry requirements, they prevent experiencing unsheltered homelessness from going into the system. These barriers configuration requirements, sobriety rules, rules against pets, and limited storage for belongings. By eliminating these deterrents, jurisdictions can help put people experiencing homelessness on a pathway toward stable housing.