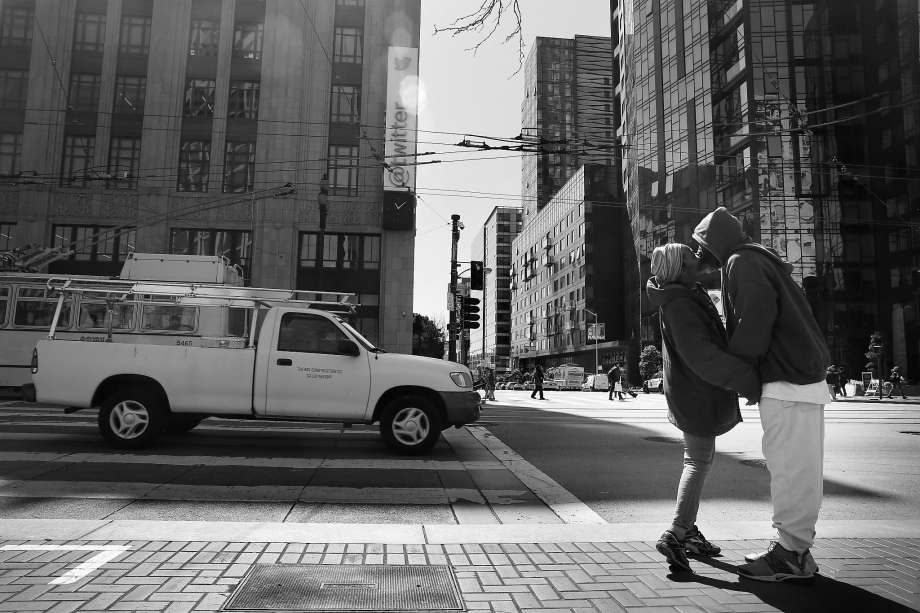 San Francisco’s homeless Navigation Center blueprint appears to be working. Here’s how they save lives, and what challenges lie ahead

After 10 years of hiding under bushes, down dank alleys and bouncing in and out of crowded homeless shelters, Sabrina Jones had had enough. The street counselor who’d been bugging her since last year to give San Francisco’s Mission Street Navigation Center a try won out. Jones went in.

More than a month later, she is free of heroin, getting therapy for depression, and is lined up for supportive housing.

At 49, with her first two grandchildren recently born, Jones would like to be part of their lives — and she says the Navigation Center’s phalanx of programs convinced her that it might actually be possible.

“I had no idea how awesome they could be here,” she said the other day as she petted her Chihuahua, Lucy, in the center’s spacious courtyard. “They’re just so … what’s the right word? … kind. They work with you, and don’t get so hard on you when you mess up.

“Most of us would still be out there again if it wasn’t the way it is here,” Jones said. “I always lived in the cuts (hideaway spots like bushes and alleys), and I’d go back there if I had to. But the difference is this place. They don’t give up on you.”

People like Jones were exactly whom city planners had in mind in 2015 when they created the nation’s first Navigation Center — the longtime, hardest-core homeless folks who have failed out of, or resisted, every other aid meant to get them off the streets.

The idea was to create a new “low-barrier” shelter model that would let homeless people come in with their partners, pets and belongings, stay 24/7, and get unusually intensive counseling help for housing, drugs, mental illness or whatever else they needed to get stable. It was risky — running such a shelter costs twice as much, at about $100 a bed per night, as a normal emergency shelter, and no one knew how effective the extra attention would be.

Three years later, three more Navigation Centers have been added and the concept appears to be working out.

According to figures from the city Department of Homelessness and Supportive Housing, 57 percent of the nearly 3,000 people who have come through the system got housed. More than a dozen cities from Santa Rosa to Seattle and Austin, Texas, are copying the model, and San Francisco plans to add two more Navigation Centers in the next year.

“It’s been a tremendous success here, especially attractive to homeless people who were otherwise not being reached for help,” said Daniel Malone, director of the nonprofit Downtown Emergency Service Center, which operates the Seattle Navigation Center. “Several of us came to San Francisco to see what the center there was like when ours was in the application stage, and we were impressed.

“It seemed to get good results. And that’s what we’re getting here.”

The Seattle center opened in July 2017 and is now placing 72 percent of its homeless clients into housing, Malone said. But just like in San Francisco, housing is scarce, so the pace is slow. It can take months to land a roof, as opposed to the 60-day target originally envisioned.

In San Francisco, the housing scarcity was perhaps even more acute, but there was a human element unforeseen when the original plan for navigation was envisioned. Reality quickly intervened.

As originally conceived by the late Mayor Ed Lee and his first adviser on homelessness, Bevan Dufty, the centers were supposed to take in entire homeless camps as a community and process them into housing in a matter of weeks. It turned out that even though the camps came in as a unit, everyone had to transition at different speeds because of differing needs.

Today, some people can take as long as 18 months to move into housing — or just a month or so. Some have no identification papers, some have criminal records that make them harder to place, others have disabilities that require special accommodations. In addition, about a third of the clients wind up taking buses back to friends or family through the city’s Homeward Bound program. With all these factors, processing an entire camp at once became impossible, and it wasn’t practical to leave empty beds until the whole group could be moved.

If the city had unlimited resources, Jeff Kositsky, head of the city Department of Homelessness and Supportive Housing, said he’d rather skip the Navigation Center step altogether and just have counselors whisk people straight from their tents and into rehab, mental care or permanent housing. But that isn’t about to happen soon, he admitted.

“The Navigation Center is a great avenue for those who don’t want to, or can’t, deal with the cumbersome shelter system,” he said. “But I do think, as we do smarter investments in supportive housing, in keeping track of people to prevent duplication and more, we will be able to move people more quickly through the system.”

That’s a stiff challenge. Unlike traditional shelters, which offer fewer services, Navigation Centers handle the most troubled of the troubled.

The only way a person can get into a Navigation Center is by being referred by a city street counselor, and they always aim to give priority to chronically homeless people — i.e., those suffering from mental, drug or other severe problems — who’ve lived outside for at least a decade.

“She saved my life,” Jones said, pointing to Rann Parker, a city Encampment Resolution Team member, who at that moment was walking into the Navigation Center to check in on clients. Parker, a longtime street counselor, grinned and waved her off. “No, really,” Jones said. “I didn’t listen to anyone else until she kept at me over and over and over.”

Parker, who has shepherded hundreds of hard-core cases into various city programs, including the Navigation Center, bowed her head later as she thought about why people like Jones surrender to the aid that her team always tries to offer.

“It’s called persistent and compassionate engagement,” Parker said eventually. With Jones, “it was squatting down and talking to her every day.”

Persistence like Parker’s is also crucial for people once they enter one of the centers. As with drug addiction, curing chronic homelessness often takes several tries.

“Look, we were here before, but we only lasted a few weeks,” said Erin Price, 31, who’s been at the Mission Navigation Center since early spring with her partner, Datricia Burse, 26. “We just weren’t ready before. Went straight back out to our tent. I’ve never showed up for much in my life, done a lot of messing up. But every time I’ve messed up with these guys, they say ‘try again.’”

“And look,” she said, waving a hand over a pile of luggage she was sorting for a move into stable housing. “We’re going to our own housing unit soon. This is my first step toward an actual life.”

John Warner, who runs support services for the Mission center through the nonprofit Episcopal Community Services, said some clients need as many as five stints in navigation before a solution sticks.

“One size doesn’t fit all,” he said. “Every person has different timelines and needs, but if you are participating and give it a chance, we will keep at you until we get something that works.”

That dedication is being noticed on the streets, and it both attracts and frustrates.

“I’ve been trying to get into a Navigation Center for months, but they got no space for me,” said Dublin Bankson, 59, who has camped all over the South of Market area for two years. “I want to try. I want the help. People forget we’re human out here, and the Nav Center is the only thing that seems like it gives you some hope. But I can’t get in.”

Both fortunately and unfortunately for him, Bankson hasn’t been on the street as long as more hard-core cases, and he doesn’t suffer from the galaxy of troubles that bars others from more traditional avenues of help.

Jonnathan Mancilla, 38, is more typical of a Navigation client. Last week when he moved into the Minna Lee supportive housing complex on Sixth Street — it’s still being readied for full opening — he ended a lifetime of jail stays, rushes to emergency rooms from being shot or attacked, and general street aimlessness with a few jobs in between that began when he ran away from home at 14.

“I never trusted anyone or anything, but this HOT (Homeless Outreach Team) lady kept harassing me over and over until I thought, ‘OK, I’ll give it a try,’” he said as he hauled clothing and stereo equipment toward his room. “Nobody ever tried to help me before. I slept in a wooden box for a long time, but these guys?”

He paused as a tear squeezed out of one eye. “They didn’t just see me as a street guy. They saw me as a human. I never thought I’d see that.”

For full article, copy and paste the following link in your search bar: www.sfchronicle.com/bayarea/article/SF-s-homeless-navigation-centers-seem-to-be-13025012.php?utm_campaign=twitter-premium&utm_source=CMS%20Sharing%20Button&utm_medium=social