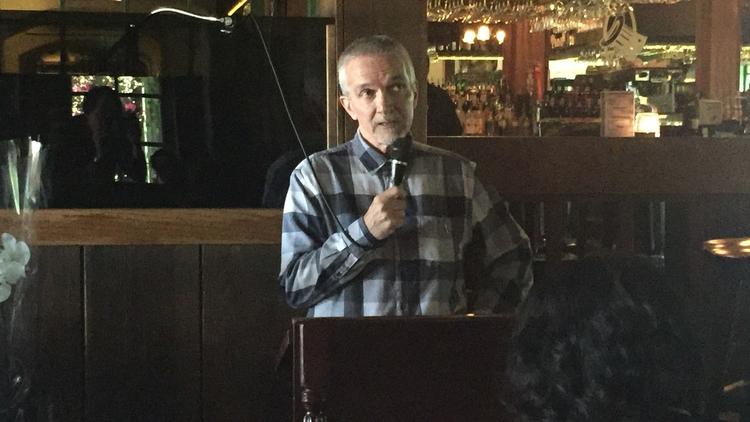 Blanca Barreiro admits she was apprehensive about renting a room to a homeless man with mental heath issues.

But then she met her new tenant, Robert Jacobs, a former psychiatric nurse who had lost his job and was living in his car.

“I was a little afraid and skeptical at the beginning, but when I met him I thought, ‘How can anyone with this type of education and this background be in this position?’” she said. “To me, it’s an honor helping him.”

Barreiro and her husband, Victor, were recognized as property owners of the year Friday by the Alpha Project’s Home Finder program. The luncheon also was a way to recruit more landlords and property owners into the program, and several people came to learn about advantages and incentives for participants.

Home Finder is among several efforts in the region that offer incentives to landlords and property owners to rent to homeless people.

A lack of affordable housing and vacancies often are cited among the reasons that efforts to house the homeless have been frustratingly slow. With planned affordable housing projects still years away, the city and county are turning to landlords and property managers as a way of meeting the need sooner.

The Alpha Project was awarded a $100,000 grant from the county two years ago to run Home Finder, which finds housing for homeless people who have mental health issues.

Other property owners and landlords also were recognized by Michael and Alpha Project Chief Operating Officer Amy Gonyeau at the Friday luncheon.

Of the 186 units in the complex, 14 tenants have come from Home Finder.

Johnson said she’d recommend the program to others, but cautioned that as with all tenants, it’s important to screen people. She credited Home Finder with helping her find tenants who met her criteria.

All tenants in Home Finders are linked to to outpatient clinics and qualify for vouchers through the county’s Project One For All initiative, which is focused on providing housing and mental health services to homeless people.

Landlords and property owners within the city of San Diego also get a financial incentive. The city grants $500 for the first tenant taken in and $250 for each additional tenant, an incentive first created in San Diego’s Housing Our Heroes campaign to house 1,000 homeless veterans.

Jacobs, 64, had worked as a psychiatric nurse and said he made good money before being sidelined following triple bipass surgery.

While not elaborating, he said his condition affected him mentally, and he was unable to work. He found help at a mental health clinic.

Jacobs lived in his car for about a year before moving into his new home.

“It was odd the first night I spent in that apartment and in a bed,” said Jacobs, who is looking for work.

Property owner Renee Walton also was recognized at the luncheon and said she has two tenants from Home Finder.

“The beauty of this is, if you have any problems, you can call a counselor so you’re not in this alone,” she said.

Terry Harris attended the luncheon because she said she is considering renting units to homeless people.

“This was an eye-opener,” she said. “I didn’t know much about the program or how extensive it is.”

Home Finder is just one of several efforts throughout the county to find immediate housing for homeless people.

San Diego County’s budget for fiscal year 2018/19 includes $400,000 in incentive programs for landlords and property owners and $1.3 million in vouchers that can be used for motels and hotels.

Aside from Home Finder, the Alpha Project also places about 200 homeless people a year in rental units by working with landlords and property owners.

The need for more available units for homeless people became clear recently when the San Diego Housing Commission reported that it was falling well short of its goal of moving people out of the city’s three large tented shelters and into permanent homes.

The goal had been for 60 percent of people leaving the tents to move into permanent housing. So far, only 12 percent have moved into homes.

For full article, copy and paste the following link in your search bar: http://www.sandiegouniontribune.com/news/homelessness/sd-me-homeless-landlords-20180626-story.html