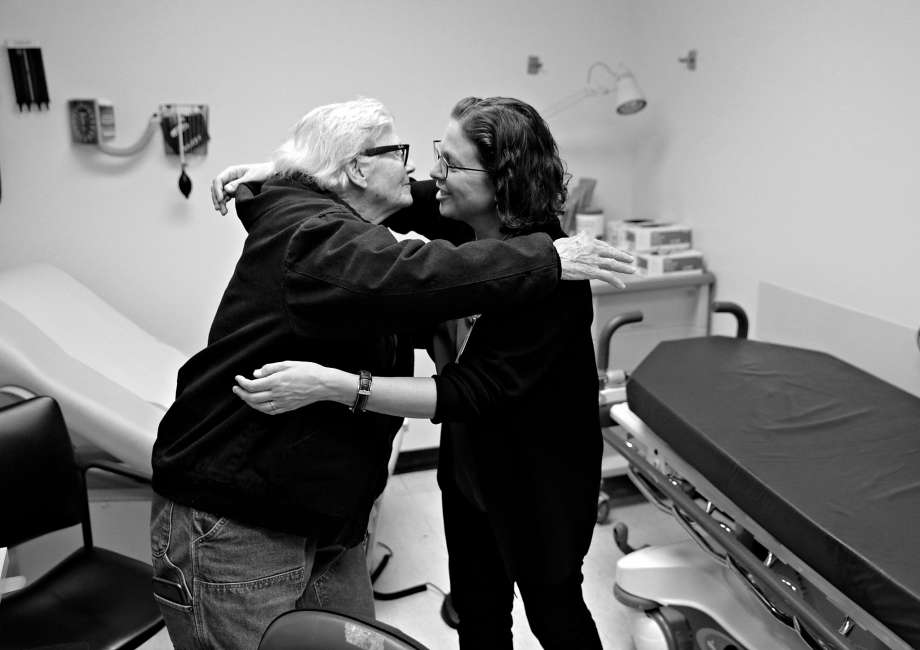 For the past six years, Joe White has been waking up every morning in a parking lot in downtown Oakland. Some days, it’s freezing. Other days, he’s baking, drenched or, sometimes, tolerably comfortable.

One constant is the asphalt: It’s always hard. And food, which White has to protect from the rats that squirm through the hole they’ve chewed through his tent door, always requires a hunt.

White is at an age when many senior citizens are in the easy-chair phase of life, taking grandkids out for ice cream and traveling for fun. Not White — and not an increasing number of people who, like him, fell into homelessness past their 50th birthdays.

In a study that raises alarms about an increasingly tattered safety net for low-income seniors in America, researchers have found that just short of half — 44 percent — of all homeless people older than 50 years old hit the streets for the first time after they were 50.

While a full half of the nation’s people living without homes are older than 50, it’s the growing number of those who fall into homelessness after that age that most concerns Margot Kushel, the UCSF professor who heads the study. The problem is especially acute in the Bay Area, where housing costs, including rents, have risen dramatically over the past decade.

The study’s finding speaks to the danger of a shrinking ability of people to adequately save money and make other arrangements for retirement, Kushel said. And it indicates, she said, that there is too little help in place to catch them before they fall into homelessness when hard times hit.

Perhaps most disturbingly, it reflects society’s ambivalence toward the plight of the elderly, she said.

“It should shock us as a nation that we have this problem,” Kushel said. “It’s almost too painful to realize.”

Kushel, whose study just concluded its fifth year and has just been renewed for another five, said White and the 450 other people she’s been tracking serve as a warning that a veritable tidal wave of older people will probably be living on the streets in the coming years.

A separate study on aging homeless, released last month by other researchers, echoed Kushel’s concerns and projected that the elderly homeless population will nearly triple over the next decade.

Over and over, she said, the story is the same: A person works into late middle age at a low-wage job, hanging in there but unable to save much money, and then trouble strikes. He or she can no longer swing a hammer, sling a shovel, stand all day in front of a cash register, drive long shifts in a truck.

The parents in a multigenerational rental home die, and those left behind can’t afford to stay. Or the older lady or man they were caring for as a home health aide dies, and so does the job.

Or they become disabled, like White, whose left knee is so badly damaged the kneecap juts out at a sickening 45-degree angle from where it should be.

“The problem here is not a lack of willingness to work, or mental health — it’s a society that doesn’t care, doesn’t have an adequate safety net built, especially for our senior citizens,” Kushel said. “This is what happens when you pay people a minimum wage they can’t live on and is worth less than it used to be, there is way too little affordable housing, and there are practically no pensions anymore. They were never able to build wealth, save for their old age.

“You put all these together, and we are ‘shocked, shocked shocked’ that homelessness among older people is rising?”

Data from the Economic Policy Institute, a Washington, D.C., nonprofit that studies labor issues, show that today’s federal minimum hourly wage of $7.25 would have to actually be set at $19 to pay for food, housing and other costs in the same way possible in 1970. Meanwhile, the average price of a house has quadrupled nationwide since 1980, and the median rent has doubled, according to online real estate databases Zillow and ApartmentList. In the Bay Area, where rents are the highest in the nation, the challenges are more severe. In San Francisco, even the city’s $15 minimum wage can’t bridge the livability gap.

“In this market, in the Bay Area, 10 or 15 years ago we would not have found the quantity of older homeless people that we see every day — we’re just seeing more and more of them all the time,” said John Weeks, a coordinator of the UCSF study. “When things went wrong, you could still rent a room, find a place somewhere, get by somehow. Not now.”

Kushel, one of the nation’s foremost researchers into geriatric homelessness, co-wrote the first study, in 2006, showing that the average age of homeless people in the U.S. was in the mid-50s.

Her latest study, titled “Hope-Home,” doesn’t reach back to the 1980s, when modern homelessness began. So she has no way to estimate how many people were becoming homeless after 50 then. But the steady graying of the street population since 1990 is significant enough to portend a coming crisis for seniors, she said. In 1990, only 11 percent of the population nationwide was 50 or older, according to UCSF statistics. Today it’s 50 percent.

“Margot is doing very important work,” said Dennis Culhane, a professor at the University of Pennsylvania who led last month’s study projecting a tripling of elderly street population. He agreed with Kushel that her research reflects a national problem, not just the Bay Area’s.

“We should all be very concerned about this,” Culhane said. “It’s going to be very upsetting to people to see so many more elderly people who are homeless, but that’s basically what we are facing: a growing aging and frail homeless population.”

Kushel, who found her study participants in Oakland, is tracking them throughout Northern California as they cycle in and out of shelters, camps and stays with friends or family. A fortunate few have gotten into permanent housing. In exploring how they cope, she and her researchers have found that that homeless older folks have far more trouble with depression, eyesight, hearing, balance, and performing average daily activities such as bathing or dressing than housed people their age.

That is unsurprising, Kushel said. Homeless people in their 50s generally display the geriatric difficulties of people age 75 or 80. That means caring for the coming boom in older street people will be expensive.

“We’re going to have to get our shelters and our supportive housing ready for an older population, with more intensive medical care — accommodations for people who have the needs of 80-year-olds,” Kushel said. “We also need to expand our attention to prevent seniors from becoming homeless to begin with, perhaps by giving subsidies so they can stay with families, the way we do for children through child welfare services.”

About 80 percent of the UCSF study participants are African American. Across America, a disproportionate 43 percent of homeless people are black, a number reflected in the Bay Area. In contrast, just 13 percent of the national population is black.

Kushel attributes this local and national disparity to a grim history of redlining, economic oppression and other ills.

“We’re going to have to make some hard decisions as a society to address how racial inequality affects so many things, but in this case, homelessness,” she said. “For one, we have to more vigorously enforce fair housing laws. Create more affordable housing for everyone. Pay people something they can actually live on.

“This will take some painful and honest conversations about housing segregation and income inequality. But they are conversations we have to have if we don’t want it to get worse.”