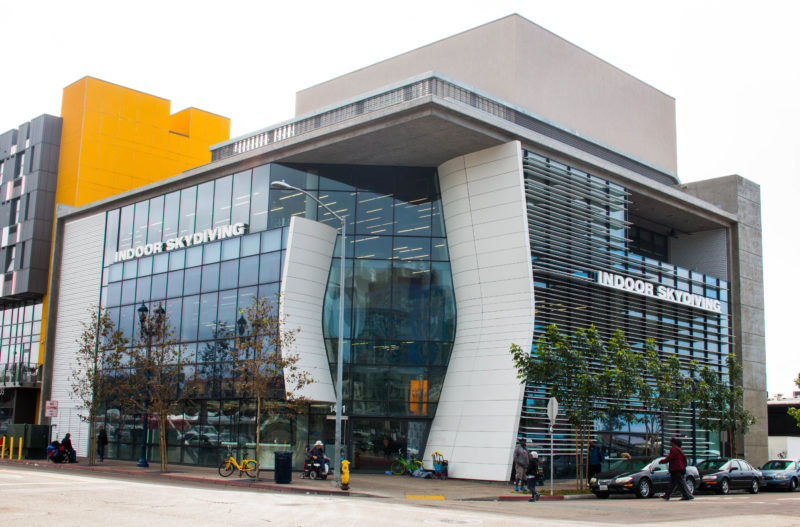 The long-delayed homeless housing navigation center in East Village could finally open its doors this fall.

City officials and Family Health Centers of San Diego, the nonprofit contracted to transform a shuttered indoor skydiving center into a homeless service hub, say workers will soon start construction to turn the space into a one-stop-shop for homeless services. Family Health Centers, which runs health clinics countywide, reports it is signing agreements with about 20 other agencies expected to have a presence at the facility at 14th Street and Imperial Avenue. They include the Legal Aid Society of San Diego, Father Joe’s Villages and the federal Department of Veterans Affairs.

Family Health Centers CEO Fran Butler-Cohen said she is hopeful the building will open in October as planned despite a series of setbacks, namely more recent process issues with construction bids, which have stalled the project since the City Council voted to approve a contract with the nonprofit last November.

The navigation center project has been plagued by controversy and delays since Mayor Kevin Faulconer first announced in early 2017 that the city would seek proposals from nonprofits to operate a facility he hopes can aid homeless San Diegans often overwhelmed by a confusing web of services.

The City Council unanimously approved the $7 million purchase of the former skydiving center last January and questions have swirled around both the city’s plans and its purchase of the building ever since. East Village and Sherman Heights residents already overwhelmed by street homelessness and services in their area have also pushed back.

Most recently, Family Health Centers struggled to secure a contractor to build the facility’s onsite medical clinic and make access and safety upgrades, requiring two separate bidding processes to comply with mandates associated with the federal funds bankrolling the project.

The nonprofit executed a contract last week for work expected to total at least $404,000 – about $100,000 more than the amount initially approved by the city, Housing Commission spokesman Scott Marshall wrote in an email to Voice of San Diego.

The city and the Housing Commission are now reviewing details before the work can begin. Once it does, Family Health Centers expect it to continue for six to eight weeks.

In the meantime, Family Health Centers has also been hiring staff and increasing its reach in East Village and elsewhere to prepare for the opening.

The agency has hired a handful of managers for the facility and five new outreach workers have already hit the streets.

Family Health Centers says those workers have connected with more than 730 homeless San Diegans since late April and that it has also secured vans to ferry those they engage with to appointments.

At a Tuesday neighborhood advisory meeting at the Central Library, Kenny Soreano of the Barrio Logan Association questioned what Family Health Centers is doing to prevent the navigation center from becoming a draw for homeless San Diegans outside the immediate area.

“How is that population control happening?” Soreano asked.

“Our goal is to treat them where they’re at and not bring them to the navigation center,” Gering said.

To facilitate that, the nonprofit plans to use $285,000 in state homeless block grant funds to fund navigation center services in South Bay and East County. Additional locations in the city are on the table.

“While the project has been delayed, the fact remains that San Diego needs a facility with centralized services for homeless individuals,” spokeswoman Ashley Bailey wrote. “This project is a critical piece to how we connect, support and house San Diegans living on our streets.”