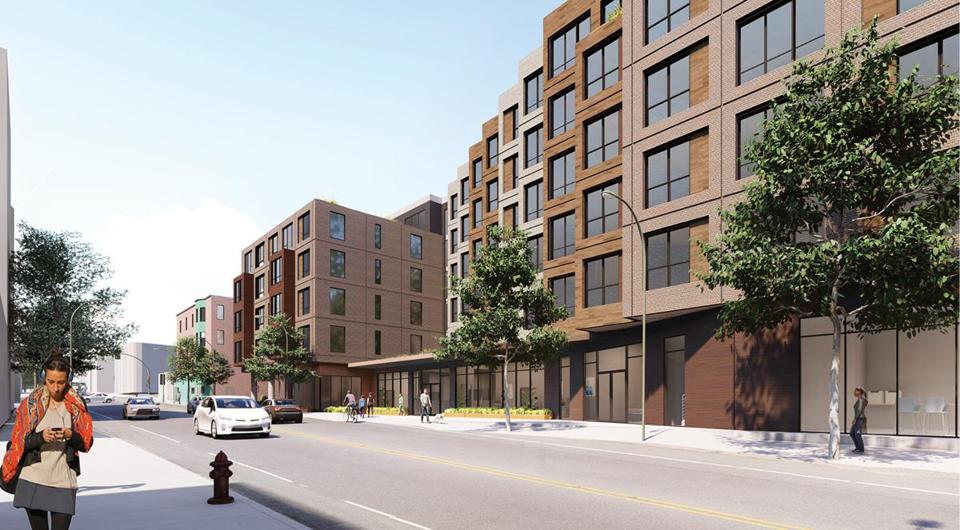 The Pine Street Inn and a leading developer of affordable housing are planning to build what would be Boston’s largest complex of permanent supportive housing for homeless people, on Washington Street in Jamaica Plain.

Pine Street and its partners have begun talking with neighborhood groups about a 225-unit apartment building near the corner of Washington and Green streets. The complex — to be built on the site of a warehouse and office building the nonprofit already owns — would include 140 studio apartments for people who have been homeless, 85 units of low-to-moderate-income rental housing, and office space for Pine Street and other uses.

It would be the first fully affordable building to go up in a stretch of Jamaica Plain, near English High School, where auto shops and light industry are increasingly being replaced by large apartment buildings and where concerns about gentrification run high.

Pine Street says it hopes the building can help meet a large and growing need for affordable long-term housing in an increasingly crowded and expensive city — and also provide support services for people emerging from homelessness. Pine Street already operates more than 850 units of permanent supportive housing in about 40 buildings around Boston and Brookline, but the Jamaica Plain project would be its biggest site.

“We’ve really trying to work to scale this up,” said Lyndia Downie, Pine Street’s executive director. “We believe if we can get people housed and support them that we can help those people stay housed.”

Long-term housing has become a bigger part of Pine Street’s mission in recent years. Downie said the homeless service agency now has about as many permanent supportive beds as it does beds in emergency shelters, and 91 percent of residents remain in housing after placement.

Housing projects like this also make up a key piece of Mayor Martin J. Walsh’s bid to reduce chronic homelessness in Boston, a problem that was exacerbated by the 2015 closure of the Long Island shelter. In a statement, Walsh said he was pleased that Pine Street is pushing ahead with its plan.

“Our goal in Boston is simple: End chronic homelessness throughout our city,” Walsh said. “This proposal has the potential to get us even further to that goal.”

“There are a lot of myths and stereotypes about who is experiencing homelessness,” she said. “In general, that can make it more difficult for projects to move forward.”

A similar project in Jamaica Plain, the 30-unit Francis Grady Apartments, was stalled for years when a handful of neighbors sued to block it. They eventually lost, and the building opened in 2016. Now that it’s up and running, it has blended in smoothly to the neighborhood, said Richard Thal, executive director of the Jamaica Plain Neighborhood Development Corporation, which helped build the project.

“Three years later we hear from people, even people who tried to stop it, who say this is fitting in well,” Thal said.

Pine Street and its partners — veteran affordable housing developer Community Builders and Rode Architects — have started meeting with neighborhood leaders in recent weeks to build support for the plan. They have scheduled a meeting next week with the Jamaica Plain Neighborhood Council.

A more formal review would get underway after they file plans with the Boston Planning & Development Agency, which Downie and Andy Waxman, of Community Builders, said is likely to happen in a few weeks.

So far, Waxman said, reaction from potential neighbors of the complex has mostly been positive.

“There’s not unanimity. There never is,” he said. “But overall, we’re finding there’s a high level of support in the community.”

The project is planned for a stretch of Washington Street in Jamaica Plain and Roxbury where the development agency two years ago first envisioned putting thousands of units of housing along the MBTA’s Orange Line, with a goal of setting aside 40 percent of it for affordable and low- and middle-income homes. It would be one of the first buildings proposed in the area since that plan was approved and would bring a meaningful chunk of low-income housing to the neighborhood, Waxman said.

“There’s a lot of development pressure in this area and a lot of folks pushing for more affordable housing,” he said. “This isn’t enough, but it’s an important addition.”

The five-story building also needs to fit in with its surroundings, said Rode principal Eric Robinson, while providing social services and housing to a wide array of residents.

“We want to use design to improve the quality of life for both residents and the community at large,” he said. “There’s a lot of pressure on this to be a great building.”

The developers also have to figure out how to pay for the building, which Downie and Waxman estimate will cost about $50 million.

So far, the program has raised about $5 million, much of it from large companies with a presence in Boston.

Downie said the developers hope to break ground on the project late next year or early in 2021.