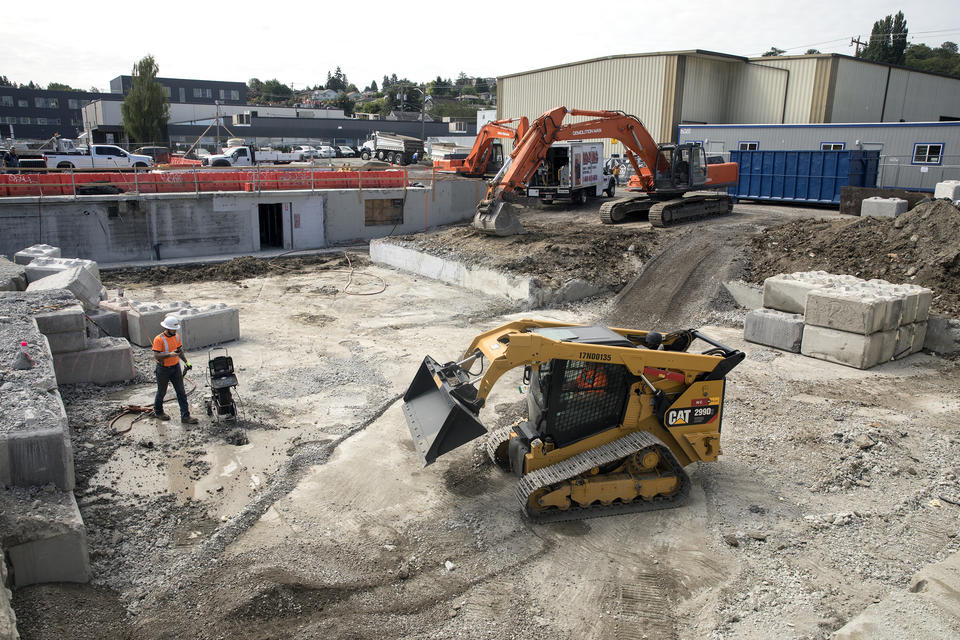 As King County’s homeless population ages and grows, shelters, service providers and hospitals are becoming overwhelmed by both the number of clients they serve and the increasingly severe medical conditions those clients face.

It’s this crisis within a crisis — which experts say is likely to worsen in the coming decade — that moved one of Seattle’s largest housing and service providers to break ground Tuesday on a combination clinic and housing project, the first of its size and scale in Washington state.

The project, Hobson Place, is led by the Downtown Emergency Service Center in partnership with Harborview Medical Center and is named for the service provider’s late former director, Bill Hobson. The Rainier Valley building will contain 177 permanent supportive housing units — with wraparound services geared toward people who have long struggled with some combination of homelessness and disability — and a clinic capable of serving 10,000 low-income clients per year.

The clinic will be operated by Harborview staff and will be open to both building residents, referrals from other providers and walk-in clients. It will have not only a full staff with exam rooms and laboratories, but also an on-site pharmacy.

DESC Director Daniel Malone called the project “the most ambitious development project undertaken by DESC thus far.” Malone said the project will be unique in its ability to combine physical and mental health care and to bring those services directly to clients.

“A lot of our folks just won’t go to regular health care clinics,” Malone said. “When we have the opportunity to bring a medical provider into our behavioral health clinics where our clients will come … [clients] are eager to have somebody address their physical health care needs as well. We find that improves our ability to do the behavioral health care treatment because people are in less distress when they’re getting both kinds of conditions addressed at the same time.”

The homelessness crisis in King County is well known — a literal emergency since 2015. Less often recognized are the challenges that come as that population ages, a phenomenon seen nationwide as vulnerable baby boomers without savings are hit with higher costs of living or medical emergencies.

In recent decades, the average age of DESC’s clientele has increased from 30 to 50, Noah Fay, DESC director of housing programs, told Crosscut earlier this summer.

With that higher average age comes end-of-life complexities, often accelerated by the impact of living on the streets. But shelters and most housing developments are not well staffed to address those complex medical issues, and there is little to no senior housing geared toward the homeless population. As a result, recent college graduates without medical training often find themselves deciding between accepting a client who may be too medically complex for the provider’s resources or sending that person onto the streets.

At the same time, hospitals struggle with discharging homeless patients — not wanting to send them outside, while also struggling to maintain the necessary turnover in their hospital beds.

While there are both low-income clinics and supportive housing developments in and around Seattle, no low-income housing project has hosted a full-scale clinic on site. Washington state Rep. Nicole Macri, D-Seattle, who is DESC’s deputy director for strategy, said by doing so, DESC could bridge a difficult gap.

“When we have providers in the building, people want health care,” Macri said. “They don’t always want to go to a clinic.”

Macri pointed to one current client as an example. The client struggles with hypothyroidism, a chronic heart condition, psychosis and a methamphetamine addiction. The combination makes it difficult for her to get across town to meet medical appointments, which became a major barrier recently when she ran out of heart medication.

“In a setting like Hobson clinic, when that patient is ready, she can come into the clinic, there will be physical health care and behavioral health care, and they’ll be able to plug her in to what she needs at that time,” Macri said.

In this year’s annual survey of King County’s homeless residents, 64% reported living with one or more health conditions. An additional 27% called their health issues “chronic,” and 23% said they had at least one physical disability, compared with an estimated 6.4% of the general population.

It’s slated to open in two parts, with completion of the second part scheduled for October 2021.

Macri said conversation about the building has been ongoing for over five years and is moving forward now because officials found the right site and a model that can pencil out for Harborview.

“Unless we truly shift how the health care system engages with this patient group, the trajectory of the need isn’t going to shift,” she said.