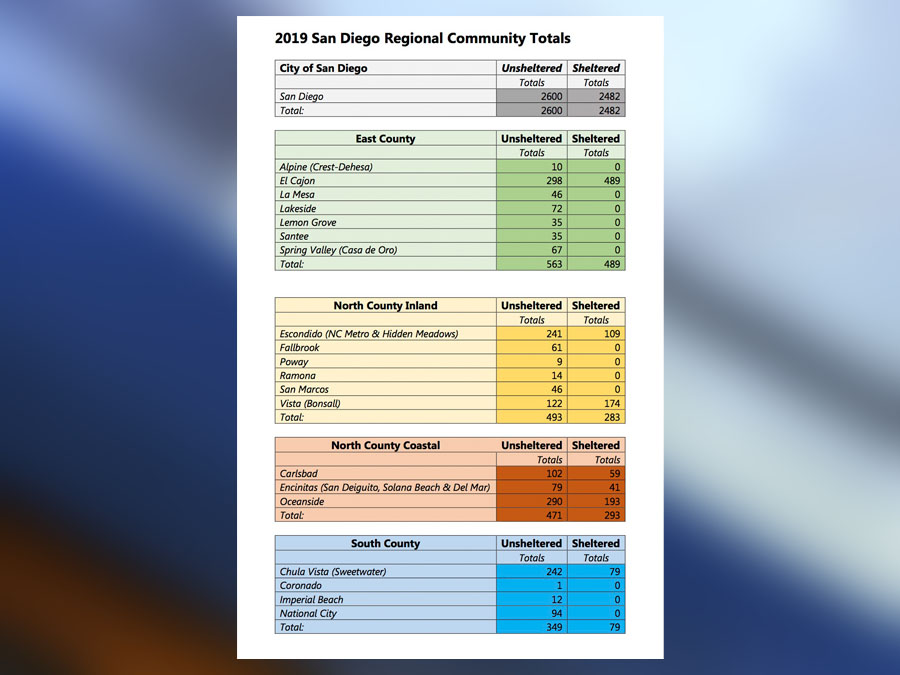 SAN DIEGO (KGTV) – There are just over 8,000 homeless people living in San Diego County, with about 5,000 living on city of San Diego streets or in city shelters.

Homeless count data collected by the county’s Regional Task Force on the Homeless shows there are 4,476 unsheltered people in the county, with 3,626 San Diegans classified as sheltered. 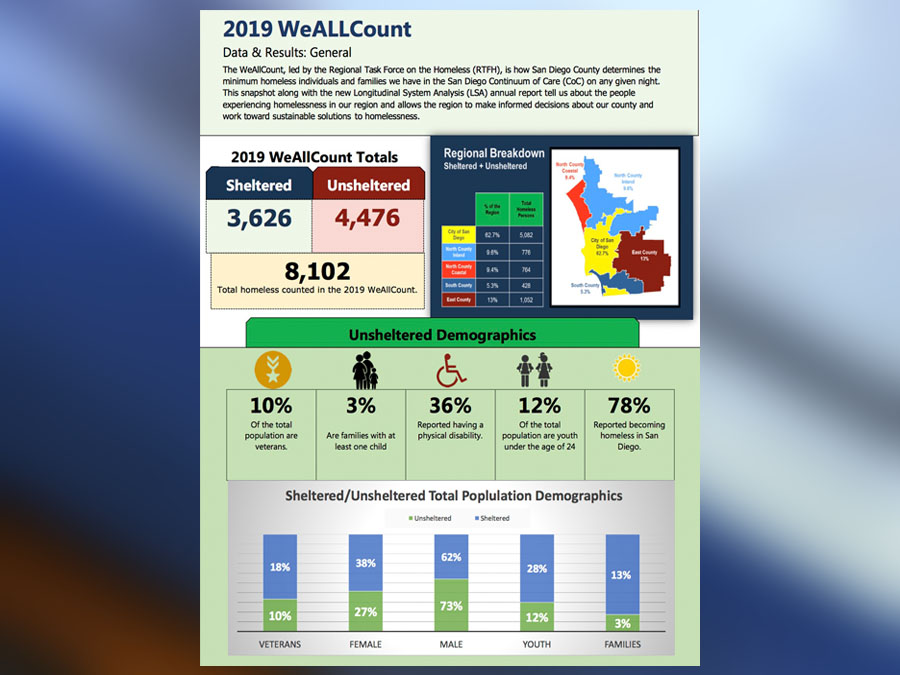 The county totals were broken down by regional communities:

Among the other notable statistics that came from the homeless count:

San Diego City Councilman Chris Ward, chair of the RTFH, said, “We have leveraged the capacity and resources of the Regional Task Force as an expert on homelessness to deliver an accurate and verifiable count that has already improved our understanding of this vulnerable population. The improved methods used focus on direct, consistent engagement with homeless San Diegans and align us with nationally recognized best-practices. This improved outreach methodology sets the tone for formalizing and standardizing a qualified outreach protocol for use throughout the county.”

“The County of San Diego works collaboratively with local governments and our community partners, to connect people experiencing homelessness with resources that put them on a path to a healthier, more stable life. Now that we have a clearer, more precise picture of the individuals’ needs, we are going to be able to establish the right mix of services and programs to those experiencing homelessness,” County Supervisor Nathan Fletcher, a RTFH board member, added.

According to last year’s count, San Diego County had the fourth-most homeless residents in the U.S. with an official count of 8,576, trailing Seattle/King County in Washington, Los Angeles County and New York City. The survey found that roughly 5,000 members of the county’s homeless population were unsheltered, living on the street or in a car, and the other 3,500 residents were sheltered at the time of the study, living in shelters and transitional housing.

For this year’s survey, the task force’s more than 1,500 volunteers used a new methodology to ensure a count that’s as accurate as possible. Volunteers not only counted homeless residents throughout the county, but also interviewed them on-site to gauge their needs and priorities, allowing county and local homeless advocacy groups to better assist homeless residents.

Volunteers also changed how they counted residents living in vehicles or temporary shelters such as tents. In previous years, surveyors multiplied each observed vehicle or shelter by two to estimate the number of residents living in their cars or a makeshift shelter.

For this year’s count, the task force counted each resident who was engaged or visibly seen by surveyors regardless of the type of shelter they lived in. Homeless residents who were observed living in vehicles or tents or on sidewalks and park benches were designated unsheltered for the purposes of the survey.

“As we look beyond the numbers, we know that each person experiencing homelessness has a unique story and needs a unique combination of housing and services in order to achieve stability,” said Deacon Jim Vargas, president and CEO of Father Joe’s Villages and the task force’s secretary. “A comprehensive plan that spans the region will be necessary to effectively and efficiently deploy adequate resources.”

For the full article, visit https://www.10news.com/news/local-news/san-diego-homeless-count-2019-data-shows-over-8-000-living-on-county-streets-or-in-shelters