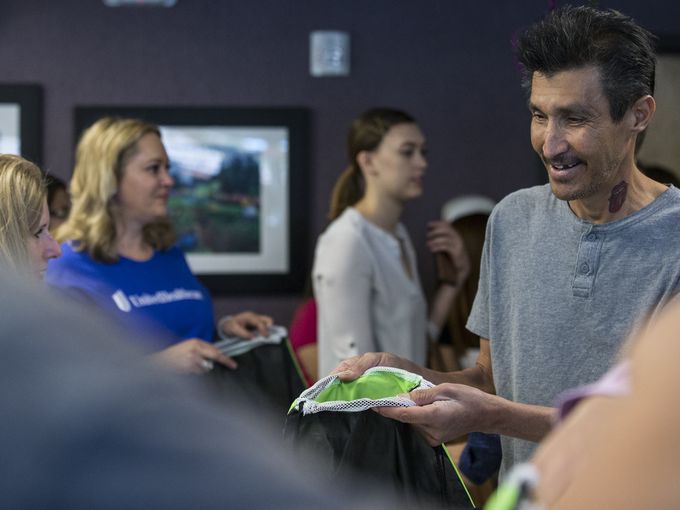 Four years ago, Denise Miles was living on the streets in Phoenix because she had nowhere else to go.

After years of working and raising children, she made a series of “really, really awful choices,” and ended up homeless, she said.

But the trajectory of her story changed in 2014 when she checked into Circle the City — Arizona’s first medical respite center for the homeless.

“When I walked through these doors, I couldn’t believe what I was walking into. Sometimes in your mind people think, ‘Homeless, oh it’s going to be awful.’ But it’s not,” Miles said. “You guys have given hope not only to me but to my family.”

Miles has been sober for three years and six months, has her own apartment, a car, new teeth and a support system, she said.

The facility is “a clean and dignified environment where (individuals experiencing homelessness) are cared for by medical professionals,” with an emphasis on treating “the whole person — body, mind and spirit,” according to the non-profit.

On May 11, the United Health Foundation announced it will provide the organization with a $1 million grant to help expand its housing and medical services at a newly renovated medical respite facility at the Maricopa County Human Services campus in downtown Phoenix.

The 50-bed facility is expected to open in July.

“What an amazing honor it is for us that United Healthcare would validate the work that’s gone on in this building and help us expand this service to so many in the community who will now have a time and place to heal,” Circle the City founder and chief medical officer Sister Adele O’Sullivan said at an event to announce the partnership.

‘The right thing to do’

Clark said 80 percent of Circle the City patients did not return to the streets or emergency shelters after leaving Circle the City. He said they also typically cost hospital and public safety services 60 percent less after they leave.

“The right thing to do — providing compassionate holistic health care to people — is also the smart thing to do for our community,” he said. “We’re literally saving millions of dollars each year.”

O’Sullivan said when Circle the City opened its respite center in 2012, it “seemed like a huge facility.” But the organization has since realized the need is larger than it initially imagined.

O’Sullivan said she’s been providing medical care on the campus where the new facility will locate for the past four months and, “every day I see the faces and I hear the stories and I wait for those clean beds where compassionate care will be provided to people who need it.”

Tom Betlach, who oversees the state’s Medicaid program, said the health-care industry has transformed in recent years to take a more holistic approach to treating individuals. That approach can include housing.

He said without organizations like Circle the City, Arizona’s health-care services would not be successful.

He cited a quote from Mother Teresa: “Do not think that love, in order to be genuine, has to be extraordinary. What we need is love without getting tired.”

“Through some miracle, Sister Adele and the team at Circle the City never seem to get tired,” Betlach said. “Sister, I hope that Circle the City is still far from getting tired because through the efforts of United Healthcare, you and your team will be doing even more for our program and Arizonans.”

The Arizona Republic-sponsored Season for Sharing campaign has supported Circle the City with $7,500 grants for each of the past four years.

For full article, copy and paste the following link into your search bar: www.azcentral.com/story/news/local/phoenix/2018/05/16/arizona-first-homeless-respite-center-expands-circle-city-phoenix/596991002/