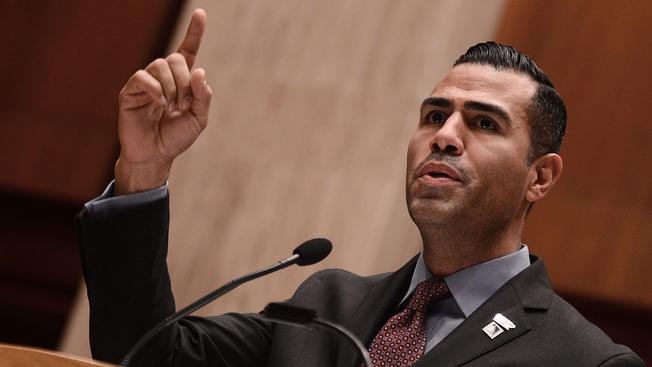 Three days a week, “Gotham” actor J.W. Cortes patrols New York’s Penn Station with a machine gun across his body. As a member of the city’s Metropolitan Transportation Authority police department, Cortes oversees the area throughout his 12-hour shifts.

Cortes, who plays Detective Alvarez in the TV series, spends the rest of his weeks traveling as a speaker or working on the show. But as he patrols one of the city’s transportation hubs, he often sees homeless men and women camped out, seeking heat in the winters and air conditioning throughout the summers.

Their actions remind Cortes of his childhood in Brooklyn’s Sunset Park neighborhood. The oven was powered on to provide heat, and relatives frequently stayed over because of financial problems.

But Cortes’ family had financial issues of its own. One of three kids, Cortes watched as his parents struggled to pay the rent each month. Daunting conversations with demanding landlords often followed.

Cortes always aspired to be involved in theater and overcame his family’s money issues. He was able to do so after a stint with the Marine Corps. The realization that some kids might not receive a comparable opportunity prompted Cortes to partner with Make Room, an advocacy group that aims to draw more awareness to creating affordable housing nationally.

“I’m never going to forget the times when we were late on rent and we said ‘how are we going to get through this month?’” Cortes told NBC. “If I can share that message and remind people they’re not as alone as they may feel…it will be a step in the right direction.”

Cortes’ parents arrived in Brooklyn after leaving Puerto Rico and worked basic jobs. In addition to struggling to pay the rent, they had difficulty affording food. When the landlords weren’t sympathetic, they borrowed money or pursued second jobs.

“That was the reality of what it took to make sure we weren’t homeless,” Cortes said.

When he was in high school, Cortes escaped the violence of his neighborhood during the cocaine epidemic by singing on the subway. At 18, he realized he wanted to pursue a career in the arts but didn’t have any connections and couldn’t afford it.

Instead, Cortes departed his neighborhood and joined the Marine Corps, where he served about 13 years. After losing some of his friends in Iraq, he was determined to fulfill his dream.

So, when he returned, Cortes joined the police department. He traveled from his precinct straight to acting schools and participated in auditions during his off days. In 2014, he landed a role in “Gotham,” his first appearance in a recurring show, he said.

“Post-Traumatic Stress Disorder takes on many different forms and some people go many years without symptoms,” Cortes said. “For me, that wasn’t the case. I found that the arts were very critical in me understanding what was going on inside.”

Cortes said he decided to work with Make Room to make clear that the issue can affect anyone. Make Room CEO Ali Solis echoed that sentiment, noting that housing affordability is a common issue among military veterans.

The number of households that spend 30 percent or more of their income on rent increased by 6.5 million between 2001 and 2014, according to a report by Harvard’s Joint Center for Housing Studies.

“This is an issue impacting every community in every state across the country,” Solis said. “There isn’t one magic bullet solution here.”

To read the full story, copy and paste the following link into your search bar: https://www.nbcconnecticut.com/entertainment/entertainment-news/JW-Cortes-Gotham-Make-Room-Housing-Affordability-489532161.html